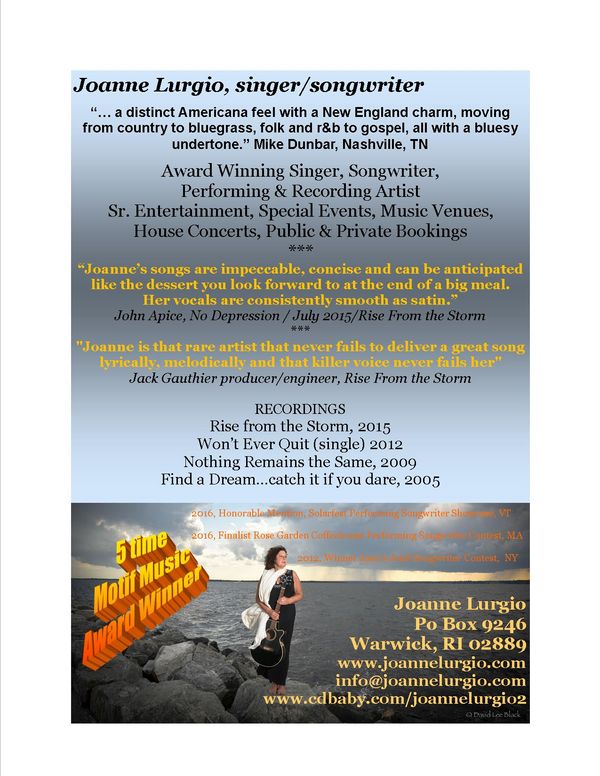 Short Bio
Joanne Lurgio ~ her songs, singing and guitar work, honed and polished in the venues of New England, have brought her to be voted Best Singer/Songwriter by Motif Magazine. Joanne has a distinct Americana feel with New England charm, moving from country to bluegrass, folk and r&b to gospel, all with a bluesy undertone.  Her songs of life and love are bound to make you ask, “Is she talking about me?”

Medium Length
Joanne Lurgio ~ a talented songwriter, combined with her gifted voice and wonderful guitar work, will prompt you to chase your dreams and offer a tale or two about ordinary people who, like her, excel and inspire. Her songs, singing and guitar work, honed and polished in the venues of New England, have a distinct Americana f

eel with New England charm. She moves from country to bluegrass, folk and r&b to gospel, all with a bluesy undertone. A hard-hitting voice that fills the room with original songs that will awaken your soul with visions of life's great" moments.
Writing songs of life, love and simply being during our ever changing lives; bound to make you ask, “Is she talking about me?”

A new recording, Crossing Jordan, songs of faith, comfort & healing, released August 2019 and already getting rave reviews;
"Lurgio has outdone herself. Her two originals and ten arrangements show her at her highest level of achievement. That she accomplished that while tackling more gospel and spiritual material shows she’s an artist on a high level of ability, a true musician who can utilize instruments, support players, multiple vocal techniques to put her message across."
Billy Copeland Music News

Seven Minutes Down (I Can't Breathe)

of the Year, Motif Music Awards

2013 ~ Nominated Singer/Songwriter of the Year, Song of the Year (Won't Ever Quit), Limelight

Won’t Ever Quit, joined by the Gloria Gemma Singers 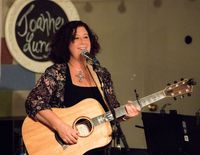 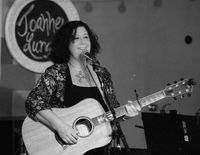